As promised, from now on, Bless we will launch two new servers every year. Due to the closure of the eGames project and the temporary suspension of the MUX Global project, we will be able to devote all our attention to Bless and more often delight you with the opportunity to level your new character from scratch, along with thousands of other players at the same time.

In the survey regarding determining the rates of the future server, the high-rate version won by a small margin, so meet the new Bless Deux x1000! Especially for those who are nostalgic for the classics, where you get it without grinding and immediately go into battle at maximum power, as well as for those who are simply tired of grinding achievements every time, we offer you a server without the achievement buff. The achievements themselves will be available, and you will be able to receive achievement points and bonuses for completing them, but they will not affect the strength of your characters in any way. In the future, if the server will be merged with a server where the achievement buff is enabled, then your buff will also work depending on the achievement points you have earned. The server itself is fully compatible with the Origin server for future potential joins.

The main change in the game will be the introduction of Condor Shards - Flame of Condor shards, collecting 30 of which you can craft a full-fledged condor. The shards themselves will be added as rewards for some quests, as well as drops from several bosses. This feature should significantly reduce the cost of the condor, make it more accessible to the majority of players, and reduce the load on CC.

In Chaos Castle itself, an anti-afk system and a gradual slowdown of potion consumption speed will be added so that the event does not drag out.

Removing the Broken Horn from the Cash Shop on the Origin server was the right decision, and we will do the same this time. Also, for the sake of balance, there will be no Scroll of Wrath, Protection, Wizardry, Mana, Health buffs in the Cash Shop before the first siege.

The main new feature on the website will be the introduction of a full-fledged classic auction, where any player can put up the desired item for sale, and other participants will be able to bid on a price increase. At the end of the auction, the item will go to the highest bidder.

Based on the collected statistics of the Origin server, the achievement system will be updated on the new server. The tasks that caused the most difficulties for the players will become much easier to complete.

All referrals registered from today will already be valid on the new server. You can get your referral link in your personal account by logging into any of the existing servers. So, if your friends are not with us yet, then it's time to invite them to join you at the opening of our new server.

Participate in the giveaway and get a chance to win 300 bonuses on any of our projects! 10 winners will be chosen randomly on April 21st! If the number of participants will exceed 100 then there will be 20 winners.


FACEBOOK
In anticipation of a new server, we suggest recalling how the opening of our previous server, Origin x30, looked like last year, where the maximum online in two weeks after the launch exceeded 3400. We would be glad to see everyone back again!

Detailed information about the server and the reset table can be found here.

Long-awaited new quests have been added to the game. Players will again have to go to the most dangerous location, Swamp of Peace. Attending Lorencia Fortress, Kanturu Domination, Kanturu Event, and Castle Deep events. Long run through Kanturu and Crywolf. In the finale, on quest 379 you have to fight with the main boss of Kanturu - Nightmare. Full list of quests you can find in our library.

Good luck with your adventures!

Author: BeL4eNaK Comments: 7
Guest access and Chaos Castle 17.02.22
New update is out! All players need to auto-update via Launcher. To get the auto-update, close the game, close the Launcher and start it again. If you have problems with an auto-update, you can manually download and install Patcher, it must be unpacked in the folder with the game client, replacing all the suggested files. During the update, all game windows should be closed.

Due to the fact that we can’t wean players from handing out their passwords, we decided to lead this movement. Indroducing new service on the website - guest access. This service allows you to give limited access to your account to another player, for example, to go to the siege or just for leveling up. In the guest mode in the game, you can not use Trade and Personal Store and throw out some items. The website does not allow you to use the market, guild bank, bonus transfer, and some other services.

In the guest access section of the website you can create your guest password, give this password to your friend, and he will be able to enter the game and the web using this password. He will be able to level up your character, make resets, tributes, buy buffs, use most services, but he will not be able to transfer items from your account to another. We hope that this service will remove the need to share your master password and reduce the number of stolen items. Guest access can be used in conjunction with safe mode.

In Chaos Castle, the display of Ice and Cold effects on characters has been fixed. The problem was that on your screen the character was displayed as frozen, but at the same time the enemy saw you without the freezing effect. Some players took advantage of this and deliberately caused desynchronization using the difference in movement speed. This type of cheating will no longer be possible.

Balgass drop improved, now when he dies, he will drop 3 items at once. We are also considering that the number of items dropped would depend on the number of elves connected to the altar at the time of killing the boss. In this case, the drop could reach up to 5 items.

Finally, the problem of abnormal consumption of Mana Potions by the Dark Lords was found and fixed.

Update: Introducing new feature on the website - selling items on the market in bundles. Now, if you want to sell an entire set, you can do it through the item market, without having to put the whole character up for sale. You can sell up to 10 items in a bundle at the same time. For each item in bundle, a separate trade slot is required.
Author: BeL4eNaK Comments: 3
Quests encyclopedia and siege abilities 21.01.22
Our library has a new section - quests encyclopedia. Here you can always get the most current information about all the quests available in the quest system. To get hints you need to hover over the name of the monster. To jump straight to the end of the list - click on the # icon. Quests with bosses for which as a reward you get experience and levels are marked with an icon and marked in bold.

Changed the system of calculation when giving stats upon reset, tribute or reset stats. No more situations where players with the same number of completed quests received different stats.

On a siege, alliance guild members will no longer be able to use the Stun and Cancel Stun siege abilities. These abilities are now only available to members of the main guild in the alliance and to guilds without alliances. This should save us from situations where an alliance is created solely for the purpose of getting additional stuns.

Fixed a bug where attending a daytime Kanturu Domination would lose the buff from the main event.

When exiting the game in Silent Grounds, characters will no longer be teleported into town. 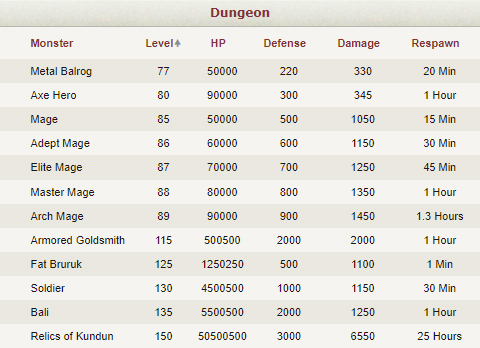 We have a new addition to our library - monsters encyclopedia. It contains all the important information about all the monsters that inhabit our Bless Universe continent. All monsters are grouped by location. There is information about monster levels, their damage, HP, defense and respawn time. Monster level corresponds to the grade of non-excellent items that can drop from these monsters. Also, you have the ability to sort the table by any of the parameters.
Author: BeL4eNaK Comments: 6
New quests 04.01.22 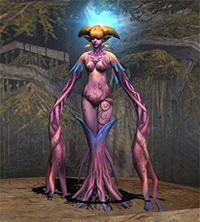 Long-awaited new quests have been added to the game. For the first time, players will have to go to the most dangerous location at the moment, Swamp of Peace. You will also have a repeated long run in Snowstorm Devias, a visit to Kanturu Domination, White Rabbit Invasion and much more. The final boss at the moment is Great Dragon.

The total number of quests has reached 339, and top loot boxes have begun to appear as rewards.

We wish you all a successful adventure!

Dear MU Bless residents! Happy new year 2022. We wish you success in all your endeavors and an excellent drop! New Year's gifts have been prepared for you in your personal account.

The introduction of new quests is scheduled for January 4!
Author: BeL4eNaK Comments: 1
Swamp of Peace 24.12.21

New update is out! All players need to auto-update via Launcher. To get the auto-update, close the game, close the Launcher and start it again. If you have problems with an auto-update, you can manually download and install Patcher, it must be unpacked in the folder with the game client, replacing all the suggested files. During the update, all game windows should be closed.

The new Swamp of Peace location is now fully functional. You can read more about this map here. Soon there will be new quest tasks, some of which make you travel the swamp.
Author: BeL4eNaK Comments: 0
Easy start for new players 17.12.21

Origin x30 server opened its doors two months ago, and if you missed the opening, now it is the perfect time to start playing and enter the Hall of Fame!

All new characters upon creation now receive a +25% experience buff for 7 days and 2000 additional stat points that will last you for the first 10 resets. Thanks to our simplified reset system, the first 20 resets can be done before level 400. The system is dynamic and every few days the level required for a reset will gradually decrease. Now you can do your first reset at level 354!

Server Empire now has a one-off discount on a VIP account - if you have never purchased VIP, then at the first purchase it will cost you 300 web bonuses instead of 500 for 30 days.

When your referral donates bonuses, you and your referral will receive an additional + 10% of the transfer amount, but no more than 500 bonuses per person. You can track the amount of bonuses earned from each referral in your account in the referrals section.
Author: BeL4eNaK Comments: 0
Merging - King to Empire 17.12.21

The time has come when the inhabitants of King server go on a long-awaited journey - King server merges with Empire server. As of December 2021, server King has been online for 1 year and 307 days without wipes, Empire 1 year and 48 days.

Server Empire was launched in October 2020 and has similar settings with King server. At this moment, Empire has 700 active players every day and more than 36 thousand created characters.

King players will be transferred to Empire. Your characters with items, resets bonuses and everything else will be moved safe and sound. The main thing is to make sure that your account has at least 1 character with resets.

The merge will take place on December 21.

Complete information about all the details of merging, instructions and recommendations are available here.