News All news
Important update 14.05.20
New anticheat update is released! All players need to auto-update via Launcher. To get the auto-update, close the game, close the Launcher and start it again. If you have problems with an auto-update, you can manually download and install Patcher, it must be unpacked in the folder with the game client, replacing all of the suggested files. During the update all game windows should be closes. Soon without this update you won’t be able to enter the game.

Hellion and Seraph now increase movement speed the same way as Demon and Spirit of Guardian.

Server rules 06.05.20
We want to remind our players about the current server rules and the mandatory need to comply with them.

It is forbidden to buy or sell anything for real money or virtual currency units equivalent to real money. You can be punished with a warning or an instant block of all seller and buyer accounts. It is only allowed to trade for Zen, Bonuses and Playpoints. We strongly recommend the use of contractual or warranty deals on our forum.

It is forbidden to use macros and any kind of programs to automate the process, in order to receive bonuses, achievement points and other personal benefits. This includes any auto-pickup variations other than the standard spacebar. In VIP / Bless Arena and Aida locations, there is now a limit on the number of items that you can throw on the ground. After 50 dropped items, you will need to return to the city to update your drop limits.

To counter afk drop farming in locations Dungeon and Snowstorm Devias, the distance from which you can pick up items in these loactions has been reduced. Now you need to be directly on the item and pick it up by hand.

Players can now purchase additional guild buff levels for Zen. All you need do to is to replenish your guild treasury and buffs will be activated automatically when enough funds are gathered. The maximum buff that you can buy is 2000, in total it will cost you 7,7 kkk Zen + 500kk vault usage fee. Buff is resetted every week after Castle Siege.

To combat AFK farm Zen, the number of Zen monsters in Dungeon was significantly reduced, and the territories of their appearance were expanded, which should randomize respawn coordinates. Sub2 now has the same Dungeon as Sub1. New Zen monster added to Snowstorm Devias: Ice Walker, Coolutin and Giant Mammoth. Now Zen monsters are scattered over a much larger area than before, which should prevent the possibility of automatic Zen collection. The total number of Zen that all Zen monsters generate remains at roughly the same level.

Now when you won a lottery prize it will remain on the ground for 5 minutes no one but you would be able to pick it up.

The population of our flagship server King x100 continues to grow rapidly, therefore we are launching Subserver 2. Along with this, the concept of how the sub-servers are arranged has changed. We take measures to maintain the most competitive environment on the main server and maintain the high value of Zen. The cost of the potion was increased, and at the beginning of next week there the long-awaited buffs for Zen will arrive.

Subserver 2 - Noobtown, only the basic locations are available: Lorencia, Noria, Devias, Dungeon, Losttower, Atlans, Tarkan, Icarus, Aida, Kalima and Snowstorm Devias. Events: Castle, Devil Square and Happy Hours. There are no Dungeon and VIP Arena bosses, Zaikans or Relics. Most of the locations are Non-PvP. The server is suitable for beginners.

Subserver 1 - Medium, all Noobtown + Kanturu and Kanturu Core locations are available. Available events: BC, DS, Happy Hour, Red Dragon Invasion, White Wizard Invasion, White Rabbit Invasion and Chaos Castle, where Flame Condor cannot be won as a reward. There are half of the bosses from Dungeon. Most of the locations are Non-PvP. The server is suitable for players who are not yet ready for end-game content.

Main server - all possible game content and all the main PvP events, top bosses and locations. Almost no Non-PvP locations. The only server where you can PK Clear in Devias. Highly competitive environment.

Detailed information the settings of each subserver is available here.

King x100 server opened its doors exactly two months ago, and if you missed the opening, now it is the perfect time to start playing and enter the Hall of Fame!

All new characters upon creation now receive a +25% experience buff for 7 days and 2000 additional stat points that will last you for the first 10 resets. Thanks to our simplified reset system, the first 50 resets can be done before level 400. The system is dynamic and every few days the level required for reset will gradually decrease. Now you can do your first reset at level 370!

Server King now has a one-off discount on a VIP account - if you have never purchased VIP, then at the first purchase it will cost you 300 bonuses instead of 500 for 30 days.

When your referral donates bonuses, you and your referral will receive an additional + 10% of the transfer amount, but no more than 200 bonuses per person. You can track the amount of bonuses earned from each referral in your account in the referrals section.

We are pleased to announce that King x100 world is expanding - an additional server is being launched. The server does not have most of the events and bosses, and access to some locations is limited. For the most part, the server is designed for BC / DS events and AFK leveling. Subserver should slightly offload the main server and improve the quality of the game. Detailed information can be found here.

Personal Stores are now disabled in Lorencia, Noria, Devias on the main server.
Author: BeL4eNaK Comments: 2
Spring screenshot contest 03.04.20
Spring - the most gorgeous periods of the year, if not for coronavirus.
But Bless Universe might be gorgeous nevertheless. 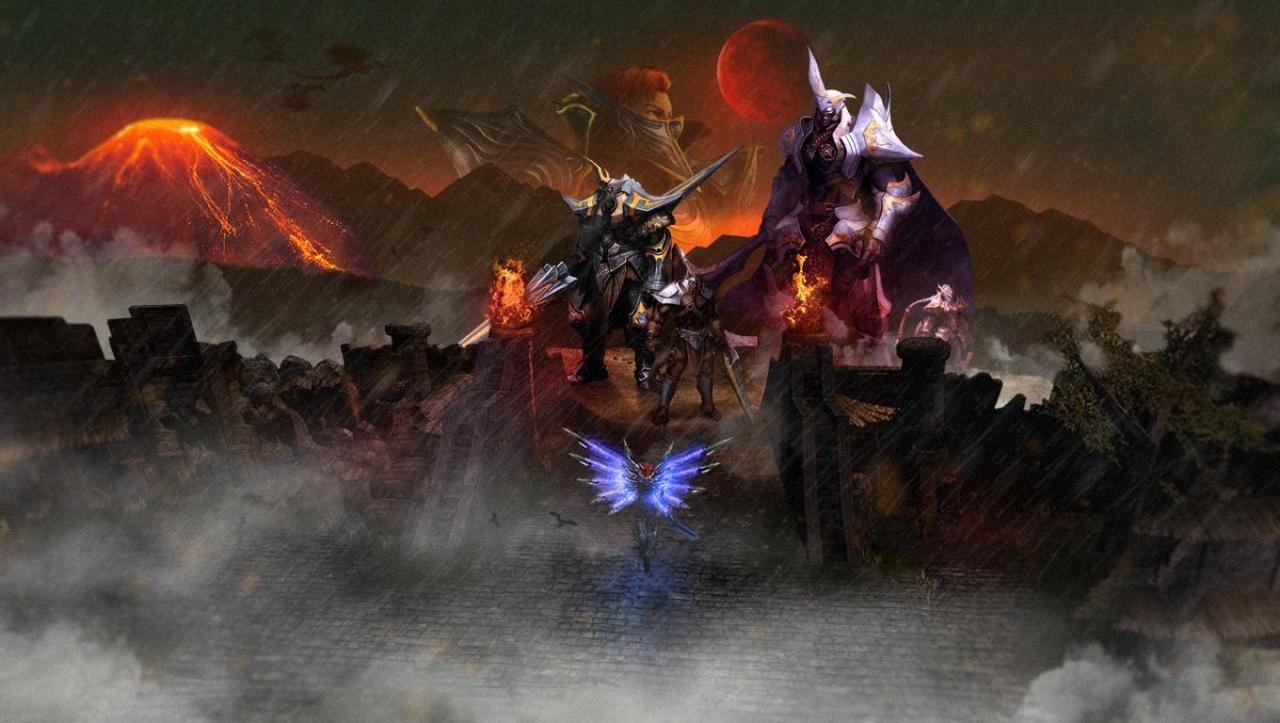 Author: Ivan Nebraska Comments: 0
Ctrl in minimized window 26.03.20
Game client was updated. All players need to do an auto-update trough Launcher. To get auto-update, close the game, close the Launcher and launch it again. If you have problems with auto-update, you can manually download and install Patcher, it has to be unzipped to the client folder, replacing all asked files.

Without this update, TDM and clicker on EE will not work properly.

Ctrl button will work now only on the active window of the game, no more unplanned kills.

Voters rating was updated, now all tops are taken into account and each of them gives +1 point for a vote. MMOTOP SMS voters rating was removed. All march winners received reward in advance. Requirements on Voter achievement notably increased.

We invite all players to join our updated Discord channel. Now it became truly useful, especially for new players.
Author: Ivan Nebraska Comments: 0
Price policy on Extreme 17.03.20
To improve the economic situation on Extreme server, prices on all the services were set, as on our other servers.

From now on, when withdrawing bonuses on Extreme server, you receive 100% bonuses as a gift, instead of previous 40% bonuses.
Author: Ivan Nebraska Comments: 0
King x100 has opened! 14.02.20


New Bless King x100 server is now open! Welcome and have fun!
Due to the online record on King server, we started to expand our game world. In the next week new spots and a few new locations are expected.

Devil Square capacity extended from 15 to 20 players, Blood Castle from 10 to 15.

Stadium on King server now will be freely opened until the first siege.

The first batch of new spots was added, monsters location is here.

From the gates near Blood Castle now you can enter a new dimension and get to a new Devias. There you will find a lot of monsters with useful loot. For the present moment, entry is available only on the King world, but it will be also available on the other servers further on.

Two additional VIP Arenas with weaker monsters appeared: Tarkan, Icarus, Aida, Kanturu. Teleport commands are now /viparena 1, /viparena 2 and /viparena 3. There is a total of 39 spots now. Bosses can be found only in the third Arena.

Snowstorm Devias is now available on all servers, also additional White Wizard Invasion will be added there.

We tried to fix a problem with disappearing stats, after the Endless Tower, we hope that this nasty bug will no longer bother players.

Launcher text is updated and a bug, that video wasn’t playing is fixed. If you do not see text or after the start of the video in launcher you receive an error, go to Internet Explorer, press ctrl + shift + delete and delete all the browser cache.
Author: BeL4eNaK Comments: 3
Back34567Next